Get fresh music recommendations delivered to your inbox every Friday.

by John Davis & the Cicadas 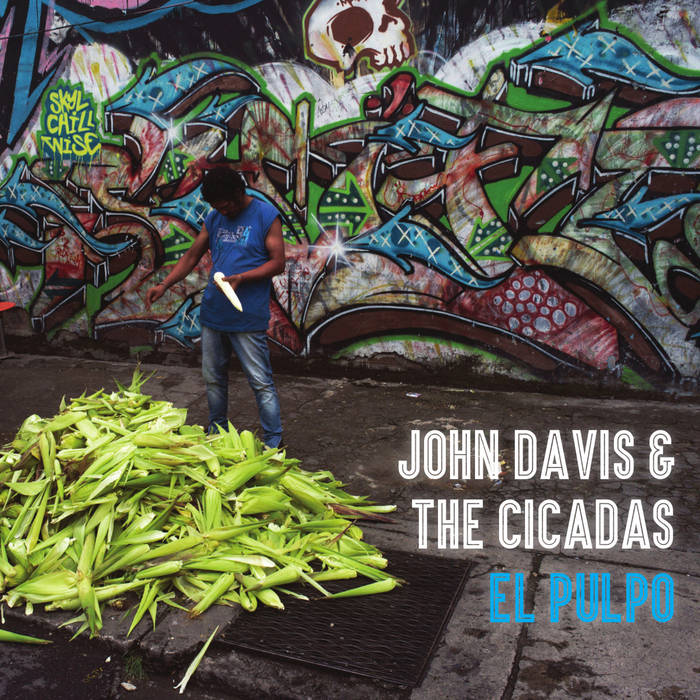 coffeeguy08 This has such a odd mix of sounds but it works amazingly well
I recommend this to any pysch rock fans
This has a poppy tune with great lyrics that tackle an important issue
Which doesn't subtract from the songs overall great sound Favorite track: HFCS.

All of the songs on this album deal with white collar crime, mostly of the agricultural & American variety. The idea to undertake this project came from a combination of the book Stuffed & Starved: The Hidden Battle For the World Food System by Raj Patel and the album In What Language? by Mike Ladd & Vijay Iyer. Some of the other sources I used to research the history and current events addressed by this album are listed after the lyrics in the booklet you can download on this page, or find inside the CD package.

10% of proceeds will go to benefit Durham For All's 10K strong campaign, which aims to build a cross-class multiracial political movement rooted in working class communities of color that can transform Durham's electoral landscape. Learn more and consider donating at www.durhamforall.org/10kstrong. This album was made in Durham and came to be in a synergistic fashion with work I have been engaged in since moving here in 2013 with Durham Public Schools, the Durham Association of Educators, and the Durham People's Alliance.

“John Davis stopped playing music in public for a while after quitting Folk Implosion in 2000. He was still writing songs and slowly returned to active performing to support his sporadic solo albums, most notably Spare Parts in 2013. His day job – teaching at a culturally diverse high school – inspired this new project, a political song cycle that uses the food industry as a metaphor for the problems of capitalism, colonialism, and racial inequality that we face on a daily basis.

The songs are lyrically dense, laying bear the shady rationalizations that support the easy life most of us in the U.S. enjoy. Davis has crafted an album full of slow, stirring melodies and tension-filled arrangements that deliver the alarming information he wants to import in a visceral way. After listening to El Pulpo, you’ll never be able to visit a supermarket or add sugar to your coffee with a clear conscience.” — j. poet, Magnet Magazine, December 2017, 9/10 stars.

“On El Pulpo, John Davis & The Cicadas assess the human cost of corporate corruption and greed within the food industry using clattering art-pop. Davis, best known for his work in Folk Implosion with Lou Barlow, was inspired by Raj Patel’s book Stuffed and Starved, about the global cost of corporate food monopolies. As a teacher in Durham, North Carolina public schools, Davis has students in his classes whose parents emigrated from countries impacted by the deleterious practices of resource- and labor-hungry American restaurant chains and food companies. El Pulpo, then, is a work of nonfiction—a really, really catchy work of nonfiction.

“Coca-Cola, you’re at public schools / Talking Congress down from health code rules,” Davis sings on the upbeat, percussive “Coca-Cola.” Throughout El Pulpo, Davis inverts marketing and advertising techniques, using slogans and brand name repetition to subvert their respective corporations. “Who Milks the Cow?” plays like a sound collage recorded in a mechanical zoo, and in this nightmare soundscape Davis recites corporate names like a beat poet reading the signs in a strip mall: Del Monte, Little Caesar’s, Pizza Hut, Papa John’s. “The whistle blows, it’s halftime,” he rhymes in a sort of slacker-rap voice, articulating the knee-jerk effects of nonstop advertising. As the weird little song fades, heavily-treated voices in the background repeat, “Call for pizza. Call for pizza.”

In a lesser songwriter’s hands, this could come across as preachy. Yet Davis isn’t merely yelling, “Wake up, sheeple!” He’s putting forward the facts as he sees them. In “Stock Up All the Prisons,” which bears all the rhythmic pulse and infectious melody of an orchestrated Liars tune, Davis goes step-by-step into the way the American prison-industrial complex functions. “It’s good to be in an office / Let’s take a look and see / How me and my friends / Can loot the treasury,” he sings, then connects America’s for-profit health care with its for-profit prison industry. “Stock up all the prisons / Lock hospital doors.”

John Davis is a musician who works solo, with Folk Implosion, with a backing band called the Cicadas, and with Dennis Callaci. He also works on defending transforming public education as a teacher - organizer with the Durham Association of Educators.

Bandcamp Daily  your guide to the world of Bandcamp